The two maps below show an island, before and after construction of some tourist facilities. 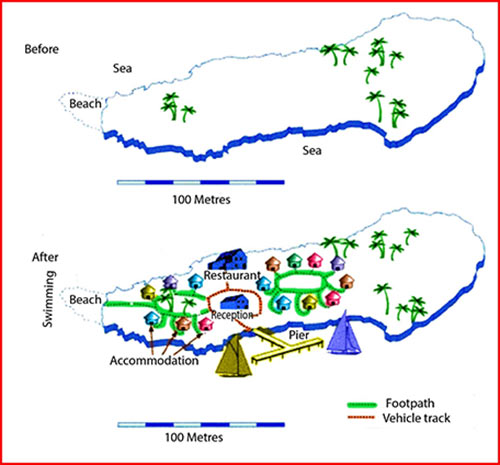 Sample Answer:
The given map shows the changes made for the tourists’ conveniences on an island. As it is shown on the given map, lots of new constructions took place on the island including restaurant, accommodation and footpath.

Before the constructions took place on the island, there were no accommodation facilities there. Only few trees were present on the first map that showed the island before it was renovated for the tourists.

The second map, that represents the island’s view after the renovations reveals the changes that were made for this island. A restaurant was built there and many accommodation facilities were made so that tourists can stay there. Reception area was in front of the restaurant and the accommodations were made in circles near the beach. Interestingly trees were not cut and most of the constructions were near the beach area.

Pathway for walking to the restaurant, beach and pier were made for the visitors and boats were introduced for the tourists. In the second map, vehicle tracks could be found which denotes the tourists’ facility to use transportation system in the island.