In June 1996, an experimental flu vaccine was trialled in a large country town on females only. 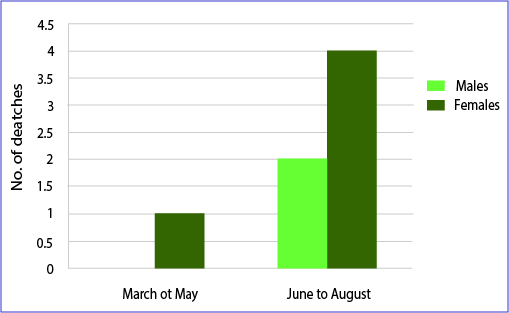 Female recipients of new vaccine groups most at risk

Flu rates for Males and Females 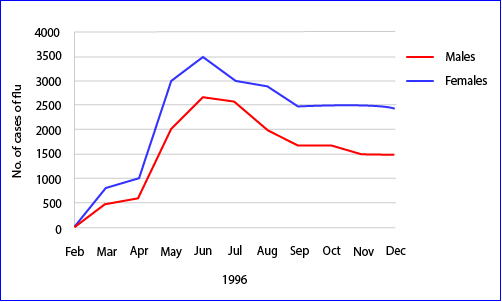 Sample Answer:
The given illustration provides information about the outcome of a trial flu vaccination program that was conducted among female of a large country town in June 1996. First bar graph presents data on deaths from flu both for male and female before and after the vaccination, and then the pie chart gives data on the risk categories of female who were vaccinated and finally the line graph shows flu rates among male and female from February to December. According to the first bar graph, only one woman died from the flue between March and May in 1996. After the trial flu vaccination the number of death among woman increased to 4 while it was 2 for men.

The trial flue vaccination could not eradicate the flue and elder women were at maximum risk (35%). Due to the vaccination, 24% babies or children were in risk while this risk percentage among the hospitalized women was 13%. 28% of woman who were not given the vaccine were at risk.

Finally the third line graph compared the flu rates among female and male from February to December of 1996. Only female were vaccinated and it shows that more female got flue than male did. In June when the vaccination was provided, there were 3500 women with the flue while it was just over 2500 for male. This number kept on decreasing and reached to about 2500 for female and 1500 for male.